When is Body Language Considered Threatening? 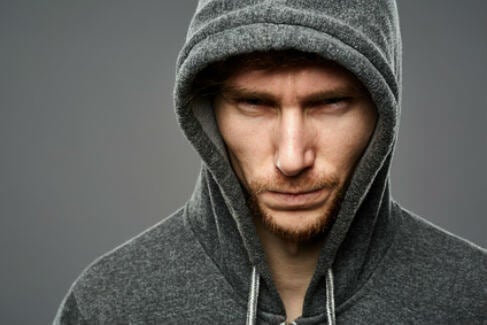 What is Threatening Body Language

Body language is one of the only true universal languages. No matter where you are in the world or whether the situation is threatening or not, body language will always speak volumes.

A lot of us think of a stereotypical, Hollywood-like situation when we think of threatening body language. You probably already know how this story goes: two young city slickers take a pit stop out in the country at a local's saloon and walk through the front door to see over a dozen burly motorists giving them the stink eye.

But the truth is, every single one of us gives off body language, and for the most part it's subconscious through simple gestures like facial expression, hand positioning, and posture.

Many people don't notice the very insinuating subtleties that go along with professionally examining body language. Before we go any further explaining how to read body language and what exactly to look for in others, it's important to explain exactly why observing body language is worthwhile.

Most importantly, being able to accurately examine how people carry themselves within any moment in time is a very necessary skill in order to give us a better idea of whether or not a person or group is a threat. The following aspects of body language are things to look out for when your instincts flare in a threatened way.

Our faces are the most expressive parts of our body, and so body language of course speaks the most through our faces, but our faces can be manipulated in just about any way. Someone who is threatening could very easily have pursed lips, may sneer or stare violently, or put on a non-aggressive facial expression and still speak volumes through other parts of their body. What's important to keep in mind when it comes to reading someone's face is looking at the parts of the face that can't easily be controlled, including the following:

Many times when someone is being threatening and about to lash out or do anything dangerous, they'll say so through their shoulders. It can be easy to tell when someone's shoulder are relaxed or raised, and as animalistic as it sounds, it's something people do instinctually.

The upper chest area is a good spot to look at and examine someone's breathing. Many times, when we are relaxed we will breathe through our stomachs, but almost all people who have their adrenaline pumping will breathe through their chests very hard. Be careful around people who seem to breathe rapidly as they are more than likely not relaxed.

Police officers are trained to keep their eyes focused on suspect's hands just in case they suddenly reveal a weapon, and this is good advice for anyone in a threatening situation. It may seem obvious to watch out for balled up fists, but it's a telltale sign someone is thinking violently. Also, it's important to understand that even crossed arms and hands in pockets could be threatening within certain context.

This  deals with overall stance, and someone's stance definitely tells a lot about an ensuing threatening situation. The entire concept of blading comes into this type of body language reading, and it's something that people naturally do when they are threatened. Keep in mind that many people who do carry weapons will blade their weapon side away from someone in order to protect and hide their weapon.

If another person comes into your personal space that's of course a moment to feel threatened, and there are several ways in which someone threatening could invade your space that you need to be aware of.

Sometimes an invasion of one's personal space may seem very friendly at first, kind of like what you would see in a Mafia movie, and someone may act very friendly and enter a friends-only space while not being invited to do so. This of course makes people react in a defensive way, or submit to their dominance in the space between you.

The closer someone gets to your comfort zone the more they are risking you putting in the ‘first-strike' that makes detrimental differences in assault cases. They may know this and be baiting you into fighting.

Touch can always be invasive in certain situations and if someone you don't want touching you touches you it can always be perceived in a form of threat.

There also many other gestures you should take into consideration as to when body language can be threatening, and these include things like insulting gestures, sudden movements and mock attacks.

If you have been charged with a violent crime, you need an experienced criminal lawyer on your side. Give us a call today!

Commitment to your cause is my primary concern as an attorney. I have been litigating cases for almost twenty-five years and have tried criminal cases that range from speeding tickets to capital murder and family law cases ranging from temporary custody to divorce cases. Allow my experience to work for you.